In the last part, we talked about how to get with a new guy. A guy that you meet in a club or at a bar. Basically a guy that you have never spoken with before but like the look of (this is a link to Part 1 in case you missed it.) In this part, we’re going to look at the much more complicated issue of getting with a guy you already know. Maybe it’s a guy you work with, or maybe it’s someone you’ve been friends with for a while; whatever the case, it’s someone already in your life who you want to be more than just friends with. So let’s try and cross this minefield shall we!

Before we begin, I should say that this was supposed be Part 2 of 3, but it turned out to be bigger than I intended so I’ve had to split Part 2 into two separate bits! I’ll post the second bit of Part 2 later this week. Bear with me here peeps!!!

So first things first, a lot of the stuff from part 1 will still apply, but there are some really big differences as well. Of course a guy still wants to have sex with you (we’ll go more into that later) but the power that you had when first chatting to a random guy is non existent when it comes to getting with a guy you already know.  This is because a) now it’s you who is on the offensive, b) it’s no longer a million guys after you and you having the luxury of taking your pick and c) if you’re going after a guy you already know, then it’s a fair bet that there are already feelings involved.

Feelings are the great equaliser. Girls tend to catch a feeling quicker than guys so when emotions become a factor, you have to be careful not to let them cloud your judgement. You see this happen all the time when a girl freaks out over a guy not texting her back, even when it’s only been an hour or so. When you’re in control, you know that there are a million and one rational reasons why a guy might not have text you back, but as soon as feelings get involved, the seed of doubt can start to plant ideas in your mind that can make even the coolest of girls make game changing errors.

Even if you do get together, there is no guarantee it will work out, which will probably mean you lose a friendship as well as a love interest.

With that in mind, before we get into the meat and potatoes of this piece, let’s be clear on the risks. If you are going after someone you’re already friends with, you are opening the door for potential heartache. It’s easy to brush off the disappointment of not pulling a random guy or of never getting that date with a casual crush, but if it doesn’t work out with someone you’re already quite close with, it’s going to hurt and that pain will be ever present when you see the person. Even if you do get together, there is no guarantee it will work out, which will probably mean you lose a friendship as well as a love interest. That being said…

…now that the boring warning stuff is out of the way, let’s get down to it! 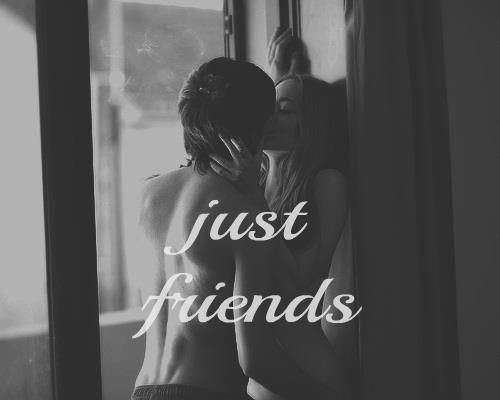 There are lots of things to consider when thinking about getting with a friend, or even an acquaintance. How long have you known each other? How deep is your friendship? Do you work together? Or live together? Does he already have a girlfriend or has he been with someone else in your friendship group? Questions, questions!

But the most important question of all is, what do you actually want him for? A relationship? Or just some fun? I’m guessing most of the time it’s going to be for a relationship because of the aforementioned feelings that are probably already involved, but it could be that you’ve lusted after him for a long time and just want to know what it would be like to go there with him. We’ll deal with that scenario first.

If you’re just on that sex tip, regardless of the the length of time you’ve known the guy, the relationship you currently have, and even if the subject has never come up, the game is quite simple. You’re trying to seduce him. Seeing as most guys want to be seduced by a girl and want to have sex as often as possible, this one isn’t really rocket science. Chances are, if he’s known you for a while, he’s probably thought about it to, so really all you need to do is put it out there. If he’s not a complete doughnut, he’ll pick up on it. Some cheeky flirting, a few compliments here and there, being tactile…like I said, not rocket science. The main thing to understand is, and trust me on this, if it’s just sex, a single guy is hardly ever going to say no. So just go for it and get yours…I’m sure you’ll find him more than accommodating.

If he’s got a girlfriend…well obviously, you and I both know you shouldn’t go there. And yet it would be so much fun to wouldn’t it? The risks are higher, the potential for it all to go wrong are sky high and the possibility that you could fuck everything up are very real. And yet…sometimes you just can’t help yourself. It’s really not that complicated. It’s that pure lust that reduces your will power and common sense to nothing but a distant memory trying to claw it’s way back only to be thoroughly buried. This is where we strip away the fairytale and look at cold, hard reality (if you’re the easily offended type or you would rather stay in the fairytale, I suggest you stop reading now.)

A lot of guys will cheat. I’m not saying you could just walk up to any guy in a relationship and he’ll just be all over you, but given the right set of circumstances, a surprisingly high number of guys will fold quicker than an origami world champion. Again, understand what I’m saying. I’m not saying that all guys will just cheat at the drop of a hat. What I am saying, is that if there is already a connection, then most guys will at the very least be tempted. Especially if it’s just sex.

If you are considering this (which again, I’m saying you probably shouldn’t) then there are some things you need to consider, the most paramount of which is; what is his relationship like with his current girlfriend? If he’s madly in love (and I’d be questioning why you would want to get in the way of that in the first place if you’re that close?) or it’s a new relationship then it’s obviously going to be harder to achieve your goal; If he’s in a relationship with a complete bitch or some chick who is dry as dirt, then not so much. Either way, you know the guy, so you’re going to have to use that knowledge to your advantage. He’s probably told you things about his relationship and if you’ve known him for a while then you probably know a lot about his sex life, and maybe even his sexual preferences. Really though, as shitty as it sounds, it probably just comes down to whether he fancies you. If he does, and you put it on a plate for him then I doubt you’re getting turned down regardless of his relationship status. If you were trying to prise him away for good it might be different, but if it’s just for sex…? Like I said, he’s probably already thought about it, so it’s just a matter of you making him think about it a little more and then making it clear that he can have it. If he’s in a serious relationship he might be worried that you might blab or catch some feelings so you might have to convince him this is not the case, which may be difficult depending on how well he knows you or what he knows about your relationship past. Whatever the case, your ability to convince him of your understanding of the situation could be a game breaker. In reality though, once he’s made that decision that he wants to go for it, it’s probably going to happen. Whether or not it just happens once and then regret poisons what was once a good friendship, well that’s the risk you’re taking. Maybe it’s great and you both have fun, or maybe it destroys not just your friendship, but his relationship with his partner as well. Don’t be under any illusion, it’s a big decision to go down this road.

I know it sounds harsh, but this blog is about reality, not fairytale.

So, ignoring the moralistic implications, the point is that, regardless of the situation, if it’s sex you’re after, then it shouldn’t be much of a challenge to take that step from friend to friends with benefits. Just trust in your own sexuality and that as a guy, he wants to have sex and has more than likely fantasised about having it with you on numerous occasions. But a word of warning, in my experience girls don’t do fuck buddies very well. It might start off okay, but feelings tend to develop, and once they do, it’s probably too late to go back. I’m not saying don’t do it…I’m just saying be prepared to get out quick. But consider this before you even attempt to pull something like this off; are you sure it’s just sex that you want? If not then DO NOT go down this route because you will end up blowing everything up, which will more than likely result in you losing your friend on all levels. It’s cool if you want more than sex, the approach is just different. Which brings us nicely to the next part!

What if you want more than just sex? What if you think that your friend is actually someone you want to be with. All in. Wifey. If friendship is not enough and you want the guy to be YOUR guy? Well, like I said, feelings change EVERYTHING!

Part 2 of Part 2 (FML!!!) will be up later this week. Feel free to comment or put ideas for future blogs up if you so desire…and thanks for reading homies!