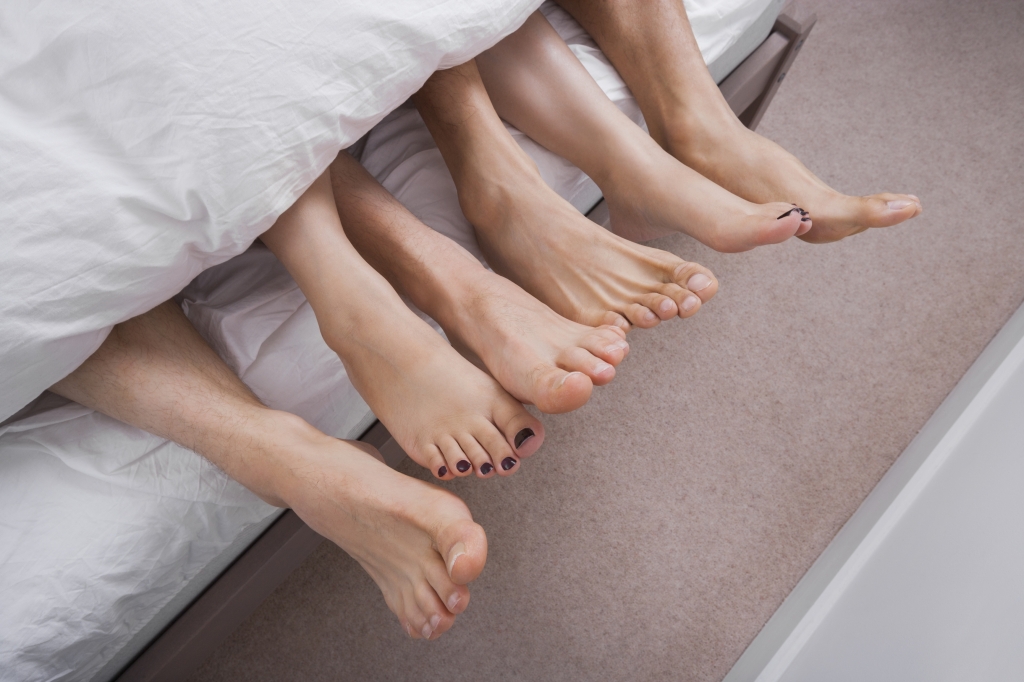 So let me take you back! The year was 2000. I was sixteen and was in love with my childhood sweetheart. It was obviously the kind of love that no one else could ever understand and was the only love like it in the whole world. Obviously. Puppy love? Pssssshhhhhh. It was Romeo and Juliet. Said every sixteen your old ever. Anyway, long story short, she got with another dude (who she’s now happily married to by the way, so turns out that was a good choice. Who knew!), and so I, spurned and eternally heartbroken you understand, took a leaf out of my older brothers book and decided I would become a bit of a player. So anyways, I kept on messing around with the girl I lost my virginity to who happened to live on my brothers estate. Now, we happened to have a mutual friend who I was also fooling around with. They found out about each other, but I managed to style it a bit which resulted in THE night. All three of us were at a house party and we ended up alone in the second girls bedroom. We’d all been drinking and it started going down. Can you imagine how excited I was?! Like excited to the point of exploding!!! Which of course I did. After literally about ten seconds. I didn’t even get a go on both it was so quick. That one still breaks me. THINK OF BATMAN OR SOMETHING DAMMIT!!!!!!! Ah well, live and learn.

Fast forward to 2007. I was at uni and was going on a road trip to Cardiff with my boys from the American Football team. We did pre-drinks, went out and got smashed. Good time. To make it even better, along for the ride were some cheerleaders from Cardiff uni and there was this one girl who was clearly on it. She was hot as well, so I was into it. As the night went on it was obvious that this was going to be more than just flirting. Smash city and all that. So we eventually all got back to my boy’s house that we were staying at, but it turns out there’s too many of us. Luckily, local hot cheerleader says some of us can stay at hers. So her and I got a cab back to her house along with two of my boys. We were all up in her room just chilling, when it was clearly time for the other two to leave. We all knew what the score was. I looked at them both and gave them the subtle nod. It’s time to layeth the pipe homies. They knew. Except apparently not. One of them kept to the script and left the room to sleep in a spare room whilst the other one just lingered about. At first I thought he was just mucking about, but then half an hour later he was still there! Seriously, my dude would just not leave, to the point where eventually the three of us were in her bed together, her in-between us. I was thinking that it was dead and he’d killed the night for me, but then she turned towards me a bit and started kissing me. I thought, ‘fuck it, he made the choice to stay here, I’m still gonna get mine!’ It started heating up, and I felt her hand take mine and move it down her body and then she started moving my hand on her clit.

And that is when shit got weird!

I started thinking how her hand was quite rough when all of a sudden she whispers to me ‘I’m into this, but are you guys sure you want to do this?’ YOU GUYS? Da fuck?! It’s then that I clock what’s going on. I stopped kissing her and looked up and saw my friend looking at me, big creepy ass grin on his face, eyes wide and nodding. I then looked down at her body and saw that her hand…was in fact his hand. Shudder. He somehow managed to worm his way in and it became a full on threesome. I was kinda fuming…but then at the same time, everyone loves a story. So we built the bridge, had a crazy night and the the balls didn’t touch. Winning.

Forward another few years, to 2011. I was in Lanzarote with my girlfriend and a couple that we are really good friends with. We were staying in an apartment together and it was an awesome time, full of banter, drinking and great company. It was also full of sexual electricity. The two of us guys kept on joking with the girls about playing some strip poker and the girls kept teasing us that it might be on the cards. You know how it is, just a bit of playful flirting. Until the penultimate night when we were all very drunk and playing cards. This was when fantasy became reality. Strip card games evolved into naked massages, which eventually evolved into the two girls kissing which then evolved into the four of us having a full blown foursome. Me and my dude even high fived. Yeah, yeah, whatever, we’re guys, get over it. It was outrageously sexy and we all loved every minute of it, so much so that we did it again the next night, which turned out to be even hotter. Trust me, you don’t know sexy until you’re having hot, sweaty, passionate sex with your lady while she’s kissing another girls rack. Just saying. That shit is awesome! Doing that actually had lasting positive effects on our sex life for a quite a while thereafter so it had long term benefits as well.

So there it is. Make of it what you will. I know I look back and smile though. Or laugh. Either way, I wouldn’t change the experiences.